Learn what we are all about.

Whether it’s designing intuitive tools to get ideas on the move or building big, beautiful ads that don’t get in the way, WeTransfer has always looked at creativity a little differently.

Having made its name in the game of quick and simple file-sharing, WeTransfer has grown into a collection of tools designed for and inspired by the creative process. Collect is the go-to app 4M people turn to for saving and sharing inspiration. Paste® is the collaborative presentation tool of choice for over 40,000 fast-moving teams. Paper® helps 30M minds sketch, paint, and draw on iOS. WePresent curates unexpected stories about creativity for over 3M monthly readers. And of course there’s the original web platform, where 60 million people send over a billion files every month.

As WeTransfer continues to evolve, creativity remains at the heart of everything it does, inspiring the company’s mission to get behind every great idea.

Good ideas deserve good company and WeTransfer has built a business with empathy at its core. Bringing offline values–like trust and transparency–online, the organization has always been about people first, creativity second, and technology third.

As a certified B Corporation WeTransfer strives to use business as a force for good. Committing to a better internet and a better world for everyone, the company continuously supports issues like climate change, diversity, and mental health. In 2019, WeTransfer helped wipe out $35 million of medical debt for those in need, earning it a spot on Fast Company’s list of the 10 most innovative social good companies.

Commitment to the creative community

Around 75% of WeTransfer users identify as creatives, either professional or recreational, and it’s this global community the company exists to support.

WeTransfer believes creativity is the driving force behind humankind, and since the beginning it’s donated up to 30% of advertising real estate to raise awareness for artists, creative work, and the world’s most pressing issues. This amounts to more than $300 million to date and has led to partnerships with artists and organizations like Björk, FKA twigs, Ryan McGinley, Solange, the Nelson Mandela Foundation, and the UN Development Program.

In 2016, WeTransfer helped launch the world’s first free Masters of the Arts in design thinking with the University of the Underground, as well as Worldwide FM, a global radio station run by legendary BBC broadcaster Gilles Peterson. 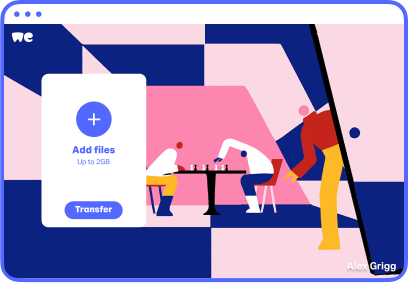 WeTransfer is the simplest way to send big files around the world as well as a popular destination to discover world-class brands and emerging artists through award-winning full screen advertising. It’s free to use or there’s the option to go premium with WeTransfer Pro. 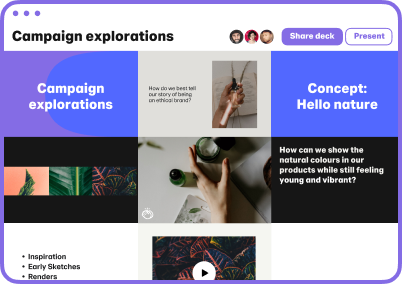 Paste® is a Webby award-winning collaborative presentation tool with intelligent design features for modern, fast-moving teams. Paste is available on the web, iPad, and iPhone, with both a free and a premium offering. 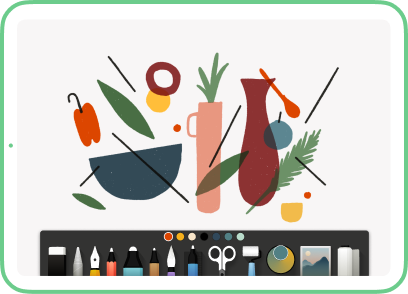 Paper is an immersive sketching tool that helps people draw, paint, sketch, or collage, offering a large collection of creative prompts. The tool is available for iOS and is free to use, with the option to upgrade to Paper Pro.

Designed for the creative professional, Collect makes it easy to save, organize, and share inspiration from across apps and platforms. It has both a free and a premium offering and is available for iOS, Android, and Mac. 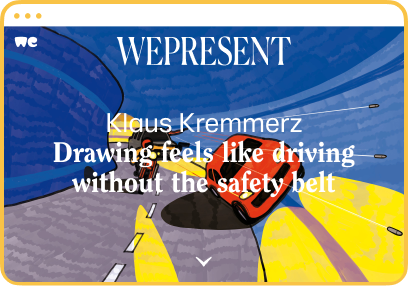 WePresent showcases the best in art, photography, music, and more, offering readers a fresh take on the magic and mystery of creative ideas. Championing diversity in everything it does, WePresent scours the globe for unexpected stories about creativity, from emerging young talent to renowned artists like Solange, Riz Ahmed, John Legend, Tyler Mitchell, Björk, FKA twigs, and Bernardine Evaristo.

Martha Lane Fox (Chair) co-founded lastminute.com and the charitable foundation, Antigone. Martha was appointed as a crossbench peer in the House of Lords and Chancellor of the Open University in 2014. She is also the founder of DotEveryone, a think tank focused on championing responsible technology. Martha sits on the Boards of Twitter and Chanel and is recognized globally for her services to the digital economy and charity.

Bas Beerens is the founder of WeTransfer. Also the founder of Oy Communications and WeMarket, Bas is currently a consultant for a wide range of companies and an active investor with the Dutch Founders Fund.

Irena Goldenberg is a partner at Highland Europe, who represents the company on the boards of WeTransfer, eGym, Jampp, JUNIQE, Smartly.io, and Wolt. Prior to joining Highland, Irena was at Flybridge Capital Partners, involved with several investments.

Erik Huggers is an independent member of the supervisory board with an extensive track record in scaling up subscription-based companies. As the former CEO of VEVO, Erik has in-depth expertise in digital media and online services.

Jonne de Leeuw is a partner at HPE Growth, who joined WeTransfer’s Board following a Series-B investment in 2019. Jonne brings in equity and active support to help accelerate the development of WeTransfer’s tools and significantly grow the user base.

Tony Zappalà is a partner at Highland Europe. Prior to joining Highland, Tony worked with Index Ventures, where he was part of the team which raised and invested in the firm’s first dedicated Growth fund.

Troy is the founder and CEO of Q&A—a company that mixes music and technology to build integrated solutions for artists. Troy formerly served as the Global Head of Creator Services for Spotify. He was also the founder, chairman and CEO of Atom Factory. In 2017, he was named Entertainment Advisor to the Estate of Prince Rogers Nelson.

Troy rose to prominence in the music industry in the late 90s while nurturing the career of hip-hop sensation Eve. Since then he transformed Lady Gaga into a global pop phenomenon and managed the careers of John Legend, Lindsey Stirling, Meghan Trainor, and Charlie Puth.

His foray into the tech world resulted in the formation of Cross Culture Ventures. Early-stage investments include Uber, Lyft, Spotify, Warby Parker, and Gimlet Media. Troy joined WeTransfer’s board of advisors in 2016.

Gilles is a well-known broadcaster, DJ, and record label owner. Gilles founded influential labels such as Acid Jazz and Talkin' Loud, and started his current label, Brownswood Recordings, in 2006.

In 2016, he launched the online radio station Worldwide FM. With nearly 40 years’ experience, Gilles is one of the most respected figures working in music today, and his eclectic taste and eye for new talent have built a peerless reputation amongst millions of fans around the world.

Since 2016, Gilles has played a key role in pushing WeTransfer’s relationship with the global creative community in new, exciting directions.

Nelly is an award-winning designer of experiences and filmmaker. She is the founder and director of the International Space Orchestra—the world’s first orchestra of NASA space scientists and astronauts.

She founded the University of the Underground —a tuition-free educational program that supports pluralistic thinking, transnational teaching, and unconventional practices.

Nelly is the author and director of three feature-length documentaries. She is also a collaborator and advisor of institutions like the SETI (Search for Extraterrestrial Intelligence) Institute, the IAF (International Astronautical Federation), the Technical Committee on the Cultural Utilization of Space (ITACCUS), and the IAA (International Academy of Astronautics).

John co-founded the Product Management Development Program to hire, develop, and grow the next generation of Intuit PM leaders.

After taking a Computer Science degree at Stanford University, John has been both an entrepreneur, founding two businesses, and has worked in Product Management at some of the leading SaaS companies in the world, including Adobe and Intuit. He took his MBA at Harvard and is currently Director of Product development at Wayfair.

John joined our advisory board in 2020.

The major shareholders (equity stakes over 10% and in order of equity participation) are Highland Capital Partners Europe (lead series A Investor 57.6.%), the STAK (19%), and HPE Growth (lead series B investor 13.5%). Between them, they control over 90% of the issued ordinary shares. Further details are available from the Kamer van Koophandel/Chamber of Commerce.

WeTransfer has an ESOP and all employees are invited to participate.

Discover the stories behind WeTransfer.

Navigate to a press section